I’m ashamed to admit it now, but growing up, I wasn’t much of a reader—at all. My love of books developed much later, however, I was always drawn to stories and spent a great deal of my childhood inventing my own. My older sister was far fonder of books, and she’ll tell you that I inevitably drew all over the pages of hers. In my defence, I am five years younger and likely didn’t realise the sacrilege of my actions. 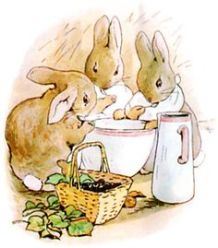 Perhaps this is why my aunt bought me a collection of videos—yes, back when they were on VHS—which came with one small storybook. Like most children’s books, the words were interspersed with pictures, but these had been left as outlines. I don’t think I ever really coloured in the pictures, as I never took to “drawing in the lines”*, but I did love to watch the three video tapes.

As you might have guessed, they were tales by Beatrix Potter, starting with a live-action introduction with Miss Potter dashing through the rain before pouring a cup of tea. Peter Rabbit was played by a plump little bunny nudging her papers towards her to encourage her writing. Miss Potter would then describe a story and the tale would unfold in beautiful animation, with a lovely tune in the background.

Beatrix Potter’s tales are beautiful and the lessons subtle. My favourite is perhaps The Tale of Jemima Puddle-Duck, and I even nicknamed my sister Jemima—a play on her actual name. I always felt sorry for the naive Puddle-Duck, but it was the “foxy-whiskered gentleman” that I liked best. Strange that a child would be drawn to the villain of the story, but Mr. Tod was so sly and charming, with a voice that sounded suspiciously like the late Alan Rickman.

It’s no wonder Jemima was enamoured with him and his bushy tail. The silly duck. The fox would turn her eggs with his paws when she wasn’t on her nest, eyeing them in a rather foreboding manner. Jemima remained oblivious, even when he spoke of making an omelette and asked her to gather herbs used in the stuffing of roast duck. If not for a dear friend, Kep, Jemima would have seen her end along with her eggs. A sad ending when her rescuers raid her eggs, yes, but it could have been worse for poor Jemima.

The lesson learned, never trust an elegant gentleman—still true even as we celebrate the 150th birthday of Beatrix Potter on the 28th July.

“There is something delicious about writing the first words of a story. You never quite know where they’ll take you.”

*I later learned in art classes, that this is a term despised by the art world as it does not allow children the freedom to create.